Don’t let lack of self-awareness hold you back Claudia Morales-Herrera is sitting in her office, her heart sinking.

She’s reading the results of an anonymous survey about her leadership as a school principal, and the feedback is coming from the people with whom she works with most closely. She’s shocked by what they’ve said.

An educator with nearly three decades of experience, Morales-Herrera had always thought building relationships and connecting with people was a strength for her.

How could she have been so completely mistaken?

Everyone has moments when what they perceive about themselves doesn’t match up to other people’s reality.

This lack of self-awareness can create dissonance in relationships and hold people back from becoming the best version of themselves.

Cultivating greater self-awareness so leaders understand what makes them tick and how it impacts others is part of the curriculum in The Holdsworth Center’s programs for district and campus leaders.

For principals, superintendents, and other top district leaders, there’s an added component: a 360-degree survey to help them better understand how their leadership is impacting others, plus one year of executive coaching to support them through personal transformation.

“Having a safe space to talk through personal and on-the-job struggles is powerful for leaders,” said Dr. Michael Greenwalt, Holdsworth’s director of coaching. “It’s often cited as what most helped leaders change behaviors and habits that were holding them back.”

When others notice, that’s evidence the changes are really taking hold. This past year, every one of Holdsworth’s district and campus leaders who received feedback made progress on the things they had set out to change, according to their stakeholders.

In Morales-Herrera’s case, her lack of self-awareness was impacting the 1,200 students at Arlington ISD’s Carter Junior High School she was determined to do right by.

Historically, Carter students didn’t perform as well on state tests as peers at other campuses, fights were common, and truancy was a major issue.

When Morales-Herrera was named principal in 2018, she set upon making improvements quickly.

She was going to whip us into shape because she loves these kids so much.

“She was all business, hard line, tough love,” said Nancy Routzon, chair of the English department at Carter. “She was going to whip us into shape because she loves these kids so much.”

That approach didn’t endear her to many teachers in the building, and some left. Many who stayed believed changes were in order but weren’t sure they could trust this new leader.

“It was bumpy,” Routzon said. “The expectations changed. She was holding us accountable for growing, not just phoning it in.”

A sense of urgency

When it came to tough love for staff, Morales-Herrera had the tough part down. It was showing them her love that she’d neglected.

When Morales-Herrera thought she was listening to people, here’s what they saw: her leg bouncing, her hands typing, her mouth interrupting, her words offering a solution or directive instead of a question or an affirmation.

“I saw a sense of urgency – we need to figure this out now, these kids don’t have another seventh grade,” said Susan Clayton, a curriculum coach for the district who formerly worked at Carter. “That passion was real, but it took up a lot of space in the room. When you think about cultivating a culture where all opinions are valued, and staff are collaborative – that suffered.”

Clayton and others didn’t feel comfortable sharing their struggles or ideas with her. It was easier to be quiet than to worry about saying the wrong thing or being cut off and dismissed.

‘It rocked my world’

The day Morales-Herrera read the feedback from her 360-degree survey was a turning point. She didn’t make excuses; she let the words sink in, allowed them to sting.

“It really rocked my world,” she said.

“All these years I considered myself a person who valued strong relationships and here are people I work with, people I lead, telling me ‘No, you do not. We can’t even get close to you.’ I realized it wasn’t just professionally; I was like this with family and friends too. I was almost in tears. I wondered, ‘Am I a bad person?’”

She called Mercedes to help her process.

Kind and gentle as always, Mercedes asked good questions. Why do you think people responded this way? What kinds of things could you work on changing?

She also encouraged Morales-Herrera to share more of her back story with her coworkers so they could understand what was driving her to work so hard for kids.

How to become more self-aware

You don’t need a coach and a 360-degree survey to improve key leadership traits, says executive coach Marshall Goldsmith. Simply ask for input from those closest to you and follow up with them periodically to find out how you’re doing. Dig into Marshall’s tips and watch a video here.

‘It’s not their fault’

Morales-Herrera immigrated from Mexico to Dallas with her family when she was 11 years old. Her parents worked incredibly hard, but there was barely enough money to put food on the table and keep a roof over their heads.

They all attended neighborhood public schools, which did little to prepare them for college. Morales-Herrera didn’t even know college was an option until the day curiosity led her into a little building across the street where she’d watched other students coming and going.

It was a nonprofit organization called University Outreach, and they helped set her on a new path. As a junior, she had to act fast, but she applied, got accepted and received scholarships to attend the University of North Texas. She would be the first in her family to graduate from college.

She thought she would go into business, but a short stint in insurance didn’t hold her interest. She started substitute teaching and fell in love with it.

After landing the substitute position on a full-time basis, she would stay late to make sure her students were getting the same learning as the classroom across the hall with a certified teacher.

“You know you’re not getting paid after 4 pm, right?” her principal would ask.

“It’s important to me that my students don’t get cheated out of a high-quality education. It’s not their fault they ended up with a substitute,” was her response.

This was the story her coworkers needed to hear. It made sense now why she pushed so hard. In the faces of the kids at Carter, she saw herself.

When the Carter kids succeeded, it would not be a fluke. It would be because the adults at their school believed in them and cared enough to set high expectations for them.

I don’t think I have ever seen that amazing of a transformation in a leader. I really don’t.

Sharing her story opened lines of communication that had been scared shut. In meetings, the energy shifted. She listened more. Smiled more. Asked for others’ opinions. Slowed her breakneck pace and gave people more time to process change.

“I don’t think I have ever seen that amazing of a transformation in a leader. I really don’t,” said Susan Clayton, the curriculum coach. “The urgency and passion was still there, but there was also a compassion that began to surface more and more.”

As Morales-Herrera began to truly see the people around her, relationships deepened.

“She is a fabulous human being – she is brilliant, hilarious, fun to be around,” Routzon said. “Letting us get to know her was really powerful.”

It also turned her into a better leader.

“In the past, I was flying by the seat of my pants,” Morales-Herrera admitted. “I was going so quickly and making decisions based on what I thought I knew rather than what I was hearing. By being a better listener, I was able to focus on what was really happening instead of what I thought was happening.”

Unlocking her potential as a leader led to new opportunities. This year, Morales-Herrera began a new job as a director of elementary schools at the district level and is pursuing her doctorate in educational leadership.

A big part of the role is coaching other principals, the way Mercedes did for her.

“She is amazing – I took so many notes,” Morales-Herrera said of Mercedes. “I have a book where I write down all of the great questions she asks.”

When Morales-Herrera announced her new role to the staff at Carter, Routzen was surprised by her own response.

“I turned my camera off on Zoom because I cried,” Routzen said. “We had developed a warmth and a real connection. Addressing that blind spot was the linchpin of making her a truly formidable leader. I miss her, but I’m so proud of her.”

Routzen and Clayton both said they look to Morales-Herrera as a role model for their own leadership.

“The vulnerability and courage it takes to see yourself from other people’s point of view and respond to that and change is very humbling,” Clayton said. “You have to suspend your ego, break yourself down and build yourself back up better. I would like to have a fraction of that much courage.” 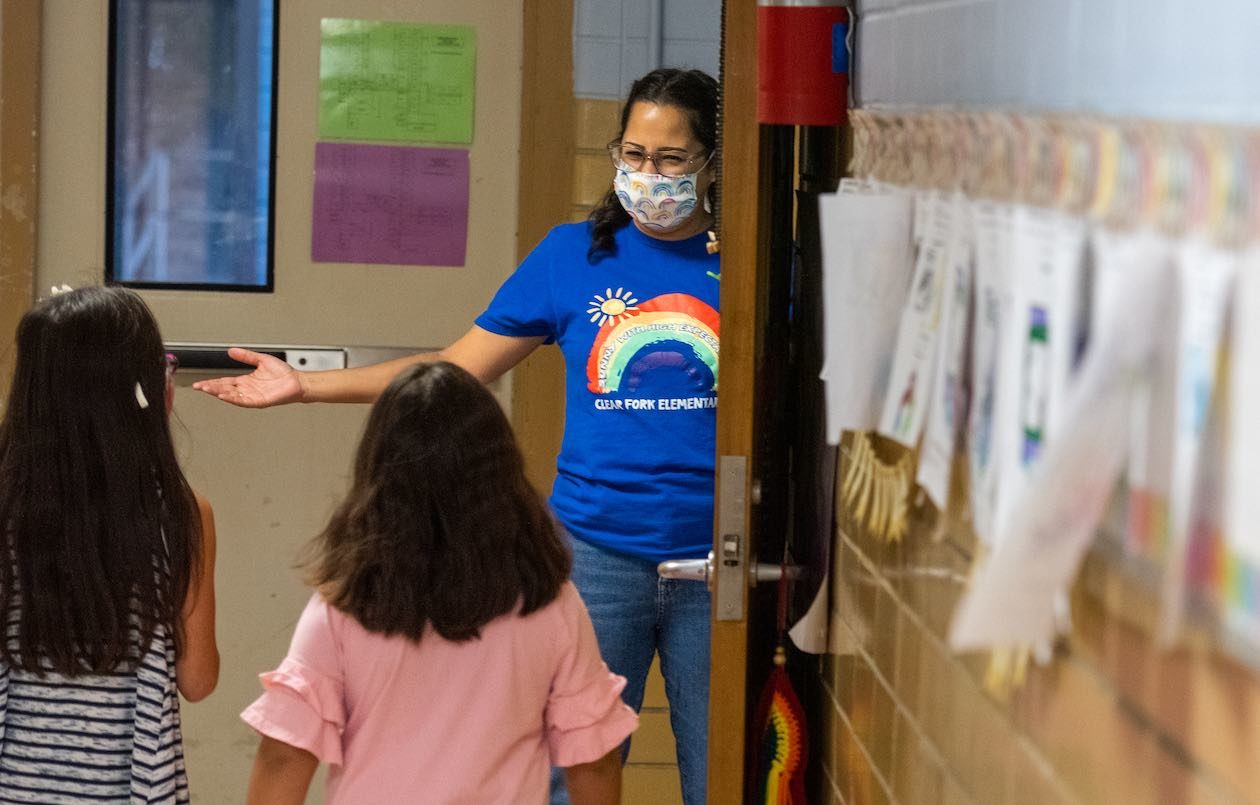