This story contains a reference to suicide. The National Suicide Prevention Lifeline is a hotline for individuals in crisis or for those looking to help someone else. To speak with a certified listener, call 1-800-273-8255.

On a still-dark morning in March 2022, Principal Josh Leonard walks into Blanton Elementary with two of his four children, guiding the wheelchair of his 9-year-old son, Aaron, who was born with Spina Bifida.

At 7:30 am, Leonard is upbeat and ready for the day. He sits at his computer to check emails and smooths the Muppets tie he chose from his collection of over 150.

Aaron and his 11-year-old sister, Julia, are buzzing about the drop of a new Fortnite game, and there’s some talk about what they will watch for movie night on the weekend.

At 7:45 am, Leonard and his kids plant themselves at the school’s entrance and open the double doors. Children start pouring in on foot and from the car line.

“Good morning. Got your best face forward?” Leonard greets every student with a fist bump and asks after every parent who walks up with their kid.

“This is my favorite part of the day,” he beams.

On the surface, it may look like nothing has changed since Leonard completed The Holdsworth Center’s 2-year Campus Leadership Program, a learning journey interrupted by the tragic loss of his teenaged son in August of 2020.

But taken together, these experiences broke him down and helped reshape him into the leader he is today: Stronger, more humble and very clear on what matters – creating a safe and nurturing learning environment to help students and staff at Blanton Elementary grow.

Before his son’s death, Leonard found his purpose in taking care of everyone else. At home, at church and at work, he was a prolific doer of things, heaping all the responsibility upon himself and making sure things were done thoroughly and correctly.

To some staff members like Damaris Gloria, a 4th grade bilingual teacher, Leonard’s uber competence made him intimidating. She saw him as her boss with a capital B, and conversations with him made her nervous.

“He always seemed to have the answer and never seemed to make a mistake,” Gloria said. “It felt like he always had everything under control, like it was easy for him.”

When Blanton joined the Campus Leadership Program in 2019, that dynamic began to shift. Gloria was on the team of four who attended learning sessions together.

At Holdsworth, Leonard told the team, “When we are here, I am one of you. I want you to tell me if I’m wrong.”

As a team, they learned about the importance of psychological safety – basically, the belief that one can speak up without risk of punishment or humiliation.

Gloria shared that as someone of Mexican descent, she had always felt like her opinions mattered less than those of the white people in the room, and so she rarely spoke up. But as she saw Leonard listening and trying to cultivate a greater sense of safety with the team, her confidence grew.

“Now I’m like, ‘Hey, I have something to say too,’” Gloria said. “My Holdsworth experience with Mr. Leonard helped me build that self-esteem.”

Their conversations about work began to feel safer. When she asked for advice or shared a struggle, she felt like he was there to help, not to judge.

While it may have appeared from the outside that Leonard had everything under control, internally he struggled with insecurity.

Student performance data at Blanton was not where he wanted it to be, and he had started to question his effectiveness.

As part of the Campus Leadership Program, Leonard was assigned to work with leadership coach Sonya Kaleel for one year. Skeptical at first, his conversations with Kaleel became a cherished connection.

She saw immediately that beneath his veneer of cheerful confidence, Leonard was hard on himself. He tended to fixate on his weaknesses and blow past accomplishments in pursuit of the next challenge. Over time, she helped him reframe his thinking to focus on his strengths and to take the time to celebrate victories, both big and small.

“If you’re not stopping to refill yourself and build yourself up, you can start to feel like an empty husk – nothing but drive, drive, drive,” Leonard said.

Then on August 4, 2020, all that drive came to an abrupt stop when Leonard’s 16-year-old son died suddenly from suicide.

His world fell apart, as if in slow motion.

As the family drowned in grief, people from church showed up at their door with casseroles and condolences. At school, staff members divvied up Leonard’s long list of responsibilities.

For once, he let them all help. He didn’t pretend he had it under control or try to hide his sadness with a pert smile.

“It shattered everything I believed about myself,” Leonard said. “I was humbled by being this broken.”

Whether he knew it at the time, it was a turning point.

He returned to school still in a deep fog. He recalls a day after he returned when his assistant principal, Chelsea Broughton, popped her head into his office.

She told him, “We’ve been dealing with everything you normally would deal with. And nobody can carry this much. You gotta learn to share.”

As Leonard slowly put the pieces of his life back together, he realized nothing would ever be the same. He thought of kintsugi, the Japanese art of repairing broken pottery by mending it with gold or silver lacquer. The art honors damage as a part of the object’s story, to be highlighted, not covered up.

“Beautiful things can be made from broken things,” Leonard said. “My son’s death is a fundamental part of who I am and what I carry.”

The experience has made Leonard a different kind of leader. He is no longer lured by the eternal hamster wheel of his task list. He focuses on the big priorities and allows others to help keep the little things in check.

And his biggest priority is people. Staff and students alike must feel safe and loved inside of Blanton Elementary. Only with those conditions in place will learning and growth flourish. Research has backed this up, showing that the principal’s influence is a major factor in student success.

Leonard is also more intentional about growing others. He’s already developed two of his assistant principals to become principals at other schools and is proud of the role he played.

According to Jeannette Reza, the school’s testing coordinator, Leonard has become a better coach to those he leads.

“He doesn’t just give me the answers, he helps me think through different situations,” Reza said. “He’ll walk me through it and ask, ‘What do you think we should do? What could be the different scenarios and the result? It’s helping build me as a leader.”

Leonard has become far more reflective and responsive to his own needs. Being a high-energy leader takes a lot out of him, so he takes lunch in his office alone to meditate and refuel.

He credits his Holdsworth experience – and especially his coach – for helping build the foundation of reflective practice needed to rebuild his life after his son’s death, and to come out even stronger.

“The work she did with me, I really felt like she moved mountains,” Leonard said.

‘A big improvement in our culture’

His evolution had a significant impact on staff.

“There’s been a big improvement in our culture on campus,” said Ann McFarland, instructional coach. “It feels like we’re learning together, and it’s okay if I have to pick you up a little and you have to pick me up a little. We’re in it together.”

“He really did blossom as a person and a leader,” said Emma Perez, a 2nd grade bilingual teacher. “Seeing him go through this personal tragedy and show us his strength, it gave us all inspiration to face our own struggles.”

For Gloria, getting to know Leonard as a real person who shared her passion for students was transformational:

“He was open about his feelings, and it really connected our hearts. Once people do that, you can’t disconnect from each other,” Gloria said. “I’m not here every day because I’m trying to please my boss. I’m here because we have the same calling and the same vision, and we’re all here because of the students.” 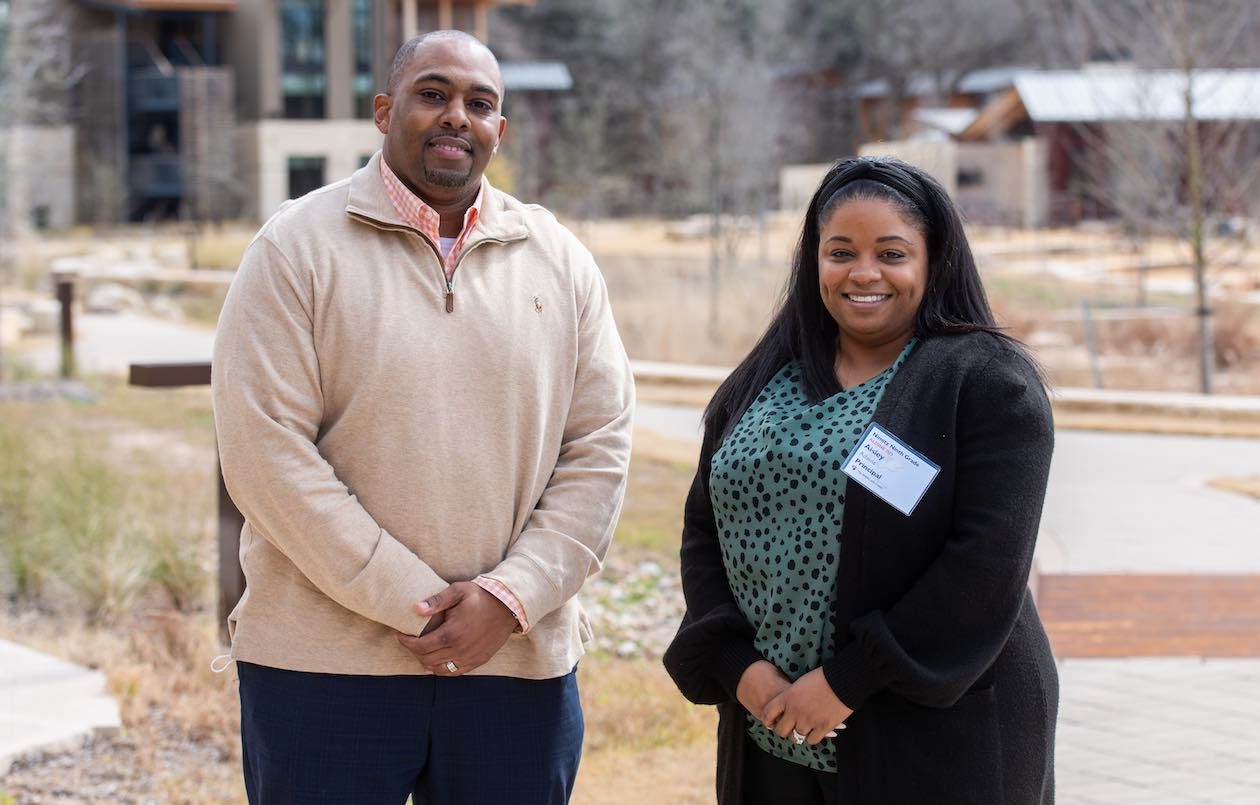 Charles Land, a principal in Aldine ISD, won Principal of the Year after learning from mentor Aisley Adams, who won the same award in 2020.